The purpose of Saraswati Muse is to showcase and honour the many ways that the creative feminine force can manifest, as well as to provide content that is thoughtful and uplifting. Through this platform we aim to encourage members of our community to explore their own creativity and support them in having a voice in the community.

Saraswati is the Goddess of knowledge, music, art and wisdom. The name Saraswati translates to “One Who Flows” in acknowledgement of the original form she took as a river in India. It is said that she transformed to that which is formless to inspire human beings in bringing forth their most creative expressions.Yasodhara Ashram is part of the Saraswati yoga lineage. 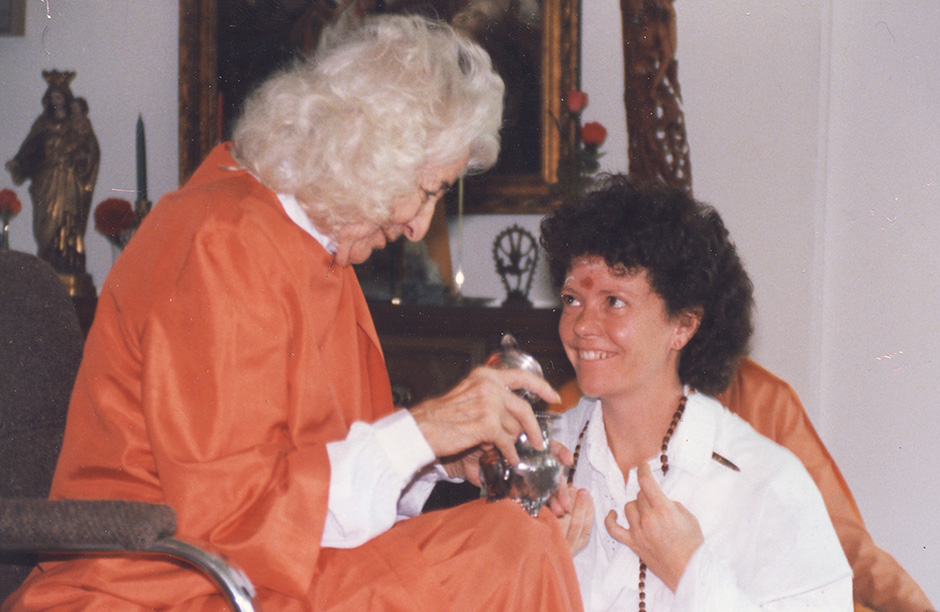 I am deeply grateful that Swami Radha is my guru. Although she is no longer physically here, her presence is still alive—in the vivid memories of those who knew her, and in the living legacy of the Ashram and her teachings.

Swami Radha was a keen observer with acute intuitive perception. When she saw a sincere desire in people to move forward, she could be direct, cutting through and getting to the point. In my case, during the first few years of being in workshops with her, she continually challenged my oversensitivity. “Be sensitive to others, not to your own ego,” is how she put it (offending my ego in the process). I was sensitive to criticism—whether or not it was real—and reacted to it. “Touchy,” in her words. In one early workshop with her, I drew a symbol to represent fear; I showed myself on stage in front of an audience who were pointing knives at me. What drama! Swami Radha asked me to walk around the room and look into each person’s eyes. I saw kindness, not attack.

One day later in our relationship, she started talking quite animatedly, saying that I should give lectures and present the teachings at large conferences. I was shocked and suggested she had the wrong person! I couldn’t imagine it. She insisted.

In retrospect I remember that her guru, Swami Sivananda, had similarly suggested that when she returned to Canada, she give lectures and start an ashram. She was aghast, thinking he didn’t know her at all. She was nervous talking to just six people, never mind a crowd. How could she start an Ashram?

But she did. She leapt and accomplished her mission beautifully. And I took steps and eventually became bold enough to speak at conferences!

Last year I attended a large conference called the Parliament of World Religions. Being among men and women from many traditions, I saw just how much Swami Radha had accomplished in her lifetime. Clearly, many powerful women were still being shut out from positions of power and struggled to gain even a foothold toward equality. Swami Radha had courageously overcome opposition both from male swamis at the ashram in India, and from male psychologists and psychiatrists in North America who challenged her credibility. I recognized her great gift in standing up for women’s spiritual rights. She set an example of leadership—founding the first ashram in Canada, writing books and establishing a lineage passed through women. She also consciously gathered and presented images of the divine feminine like Tara, Saraswati and Mary. She taught devotional practices to Divine Mother, whose worship she said, meant accepting all of life.

As I prepare to present at the International Peace Conference this fall, the integrity of Swami Radha’s work continues to inspire me. She built Yasodhara Ashram from the ground up—literally at times, hammering nails into floorboards—and establishing a firm ethical framework for spiritual life. Each person who comes to the Ashram becomes part of a group who gather to speak our experiences, explore ourselves honestly and listen to each other wholeheartedly. Living and working together in community, we courageously face interpersonal issues in order to dispel undercurrents and make real the peace we speak of.

Swami Radha established integrity, and its momentum carries us forward. This is the kind of support I feel from her. On a personal level she was tenderly embracing and incisively fierce; both qualities came from a place of compassion. She helped me to let go of self-protection and become free. And from a larger perspective, I see that Swami Radha was a powerhouse of spiritual leadership, especially encouraging for women.

I am grateful to be of her lineage, able to help pass on what she so valiantly offered. It is my privilege to share the teachings of yoga transmitted through this great yogini.

Swami Radha’s latest posthumous book, Yoga: A Path of Awareness, will be published this summer.

Swami Lalitananda is the president of Yasodhara Ashram. A swami since 1996, she is the author of two books, including The Inner Life of Asanas, and she was a columnist for the award-wining yoga magazine, Ascent.

Read her other articles in Reflection from the Path.

“Swami Radha established integrity, and its momentum carries us forward. This is the kind of support I feel from her. On a personal level she was tenderly embracing and incisively fierce; both qualities came from a place of compassion. She helped me to let go of self-protection and become free. And from a larger perspective, I see that Swami Radha was a powerhouse of spiritual leadership, especially encouraging for women.”