Learn how we are keeping the Ashram a healthy and safe retreat environment. Read more 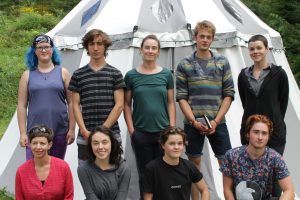 The idea for the Youth Climate Action Retreat at the Ashram in August came from hearing the weight born by youth and a desire to provide space to come together and relax.

The weekend itself was quite sweet. We had nine people attend, ranging in age from 15 to 29. Some were experienced with Yasodhara teachings; but for most, this weekend was an introduction. The group came together easily with generosity, curiosity and sincerity. In discussions on climate action, the participants were clear that we are where we are today because people have lost connection to themselves and to the world. They see unity as the balm for this crisis, understanding that what we are facing is less a climate crisis and more a human crisis.

It was a gift for me to be able to hold the space for such remarkable people. And suddenly I find myself in a place of gratitude for the leadership they are offering the world, reminding me of my own youth and how adults related to me. That does not mean I step back but rather continue to align and step forward into the space created. We can do this. We can change our lives to live with greater equality and less consumption. We, as earthlings, need to change the story within which we live in this world. We can live better by taking less and offering more.

At the end of the weekend, the participants reflected on where they have come from and what is needed now to support their next steps. Several voices remarked on the change that occurred over the two days. Two days and worlds were transformed: this is available to us all.

The largest general strike ever seen in Nelson city history was held on Friday September 20, a month after The Youth Climate Action Retreat here at the Ashram. The strike was part of a week of Global Climate Action, where over 4 million people around the world disrupted business as usual in the name of demanding legitimate climate action to save our planet and our future.

The same thread of strength in unity experienced during the Ashram retreat was expressed throughout the strike in Nelson. A banner carried by seven youth strike organizers (I being the oldest at 24) exclaimed “United We Stand, Divided We Fall” as all 1500 people in attendance marched through the city streets, filling Baker St and blocking the highway.

Several of the Ashram’s residents were part of the action, carrying a homemade banner during the march and hosting a booth throughout the day. A group of us played a music set for the occasion. Globally and locally, the strikes were an example of all that can be achieved when we gather together, young and old, rich and poor, to work towards something greater than ourselves.